Battle of the Numbers 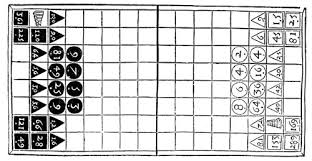 Among the accomplishments of Hermann of Reichenau, he also provides us with the set of rules for one of Europe's oldest board games, developed by a monk to teach Boethian number theory, called Rithmomachy or Arithmomachia, "Battle of the Numbers."

The pieces on the rectangular 8x16 board, their "ranks" and their allowed moves are determined by mathematical rules based on their geometry (Circles, Squares, Triangles, Pyramids) and the numbers marked on their surfaces. I could not possibly explain the rules in a short post—nor should I be able to, since the intent was to design a game that truly requires a grasp of mathematical functions and the skill to apply them quickly. Feel free to educate yourselves on the rules here and here.

It was more than just a game of strategy like chess (to which it has some resemblance). According to a 2001 book, Rithmomachy


combined the pleasures of gaming with mathematical study and moral education. Intellectuals of the medieval and Renaissance periods who played this game were not only seeking to master the principles of Boethian mathematics but were striving to improve their own understanding of the secrets of the cosmos. [The Philosopher's Game, Anne Moyer]

The game became popular as a teaching aid in monasteries in France and Germany, and even reached England where Roger Bacon recommended it to students at Oxford. Over the centuries it spread as an intellectual pastime, and by the Renaissance it had spread enough that instructions were being printed in French, German, Italian and Latin. Sadly (mercifully?), the game fell out of popularity and the public's consciousness after the 1600s until modern historians re-discovered it.
Posted by Daily Medieval at 6:30 AM