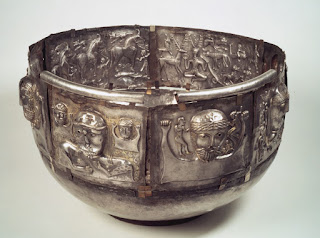 On 28 May, 1891, a worker digging in a peat bog near Gundestrup in Denmark made an extraordinary find: a shallow bowl holding a dozen curved panels (five large and seven smaller) and a couple short metal strips. Analysis showed the material to be 97% silver and 3% gold.

A Danish archaeologist realized that the pieces could be assembled into a deeper bowl, the silver strips forming a rim. Originally thought to be Celtic, careful examination of the figures carved on the silver panels revealed a mixture of images from different cultures. One of the images—an antlered male figure holding a torc in one hand and a serpent in the other—is identified as Cernunnos, the "Horned God" of Celtic folklore.

Who would have created something like this? The work resembles that of Thracian (Thrace included Bulgaria and parts of Turkey and Greece) craftsmen from the 2nd century BCE. Thracian metalworking would have been happening at that time in the Balkans. It is assumed that someone with Celtic leanings created the artwork. How it made its way to northern Denmark is anyone's guess.

The images on the Cauldron represent several themes: fertility, destruction, life and death. One of the most intriguing images is a bull hunt, depicted on an oval medallion. Three dogs are part of the hunt, and above the bull is a woman warrior, leaping to strike the bull with a sword.

Another panel shows two rows of warriors, one of which is mounted on horses with horse tack seen in Eastern Europe. The other row is followed by three men playing a Celtic musical instrument. A giant appears to be dipping a man into a cauldron, possibly representing rebirth.

Was the Cauldron a gift to a warrior or ruler? Was it created to be part of some magical ritual? A great deal of wealth and effort went into creating it; it is unlikely it was used as a fruit bowl. And why was it disassembled and buried in the peat bog? To hide it from enemies? As a sacrifice to gods? We will never be sure.

Actually, sacrificing by throwing things into peat bogs was a common occurrence up through the 2nd century CE. We should look at some of the things that archaeologists have recovered from peat bogs.
Posted by Daily Medieval at 8:31 AM