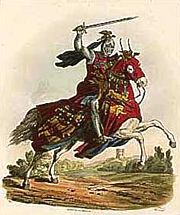 This is about Thomas, the 2nd Earl of Lancaster. He was born about 1278 to Edmund Crouchback (the second son of King Henry III). His life was not without problems.

He had an unsuccessful marriage to Alice de Lacy. They had no children, although Thomas fathered two illegitimate sons. Alice was abducted in 1317 by a knight under the Earl of Surrey. Thomas divorced Alice and started a conflict with Surrey which was ended by King Edward II. During the coronation of King Edward II, Thomas carried the royal sword Curtana in the procession. Like many nobles, however, he turned against Edward when Edward showed favor to Piers Gaveston, reputed to be the king's male lover.

Thomas led two revolts against Edward. One, in 1310, led to Parliament putting limits on Edward's spending. The second, in 1321, led to defeat and his execution for treason on 22 March, 1322.

Thomas had been given Tutbury Castle, which he renovated and made into his primary residence. His presence benefitted the surrounding countryside, stimulating the local economy. The famous Tutbury Hoard—the largest collection of found coins in history—was so large it must have come from his treasury. Historians assume he had gathered it to pay his allies and Scottish mercenaries, probably during his second revolt against the king. It was lost while crossing the River Dove, however, leaving it to be found by workmen in 1831.

But poor Alice! In her life she was married three times, abducted, widowed twice, imprisoned, raped, and had her in hesitance stolen. I'll tell you more about her next.
Posted by Daily Medieval at 8:55 AM