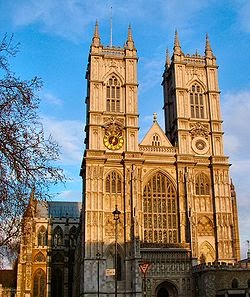 I started this here with the origins of what we now call "Westminster Abbey." A major rebuilding campaign began about 1245 by Henry III (1216-1272), who desired both to enhance the resting place of Edward the Confessor, whom he admired, and to create his own royal burial site. (Like Edward, Henry was buried in Westminster long before the construction was complete. Edward was re-interred in 1269 in a newly completed shrine.)

The task of reconstruction was enormous, and the fact that it took so long had nothing to do with a casual attitude to getting it done. The pace of some stages of work was staggering for the time. We have some of the records involved. Numbers of laborers fluctuated depending on the season and the finances available. There were some financial realities that caused occasional work stoppages. Only two people were paid a continuous wage: the two masters of the works, Master Henry and Master John of Gloucester.

Records for part of 1253 (end of April until early December, when most work would have paused for the winter), list the following workforce:


For wages of 39 white cutters [freestone masons] 14 marblers, 20 layers, 32 carpenters, together with John of St. Albans, 3 painters, 13 polishers, 19 smiths, 14 glaziers and 4 plumbers, £14 12s. For the wages of 150 laborers with Keepers, clerks and the charges of two carts daily £6 16s. [quoted in John Steane, The Archaeology of the Medieval English Monarchy]

The labor would have come from local hires or specialists who traveled from all over England to join the project. What about materials, however? The two Masters of the Works would travel to find suitable materials (we know this because the records showed them being paid double for travel expenses). For convenience, "buying local" would be best, and we know that many suppliers were London-based. For example, Richard of Eastcheap had apparently managed a monopoly on the wood used for scaffolding and ramps. Agnes of London not only was a major source of burnt lime used for concrete, she was responsible for organizing 440 cartloads of sand to the work site. Other references exist for two cartloads of charcoal provided by Roger of Barking, and carved stones from Roger of the Tower. Henry of Bridge supplied ironwork, especially nails. A 1265 record mentions a Richard who submitted a bill for 16.75 hundredweight* of lime. Some of these names re-occur for other building projects, such as the Tower of London.

The materials themselves would have come from all over. Some master masons came from Oxford, and   it is known that the Windsor Castle upgrade used stone quarried in Whately, a mere few miles from Oxford. Much of the material might have come from storage very close by: the southern end of London Bridge was home to a public works yard that maintained large stocks of timber, stone and ironwork to aid in the necessary upkeep of the Bridge.

*A hundredweight in England was approximately 116 pounds.
Posted by Daily Medieval at 7:28 AM