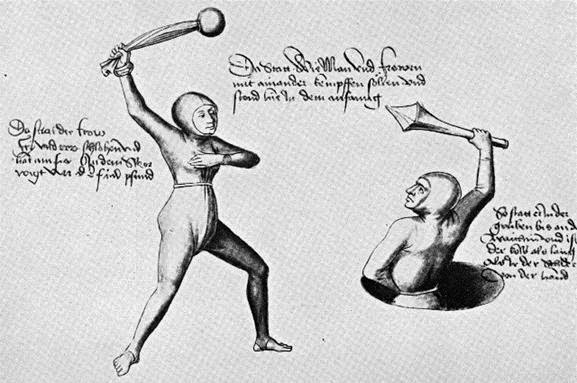 There is a lot more to say about Trial by Combat than can be put into a brief post. The history includes interesting anecdotes and surprising facets. One such facet is seen in the picture to the left. It comes from the 1467 Fechtbuch [German: "fight book"] of Hans Talhoffer (c.1415-1482), who was mentioned in the above link on Trial by Combat. Talhoffer produced at least five books on fencing, and apparently trained people for Trial by Combat.

As for the picture, translations of the captions should explain all:


Here is how a man and woman should fight each other, and this is how they begin.
Here the woman stands free and wishes to strike; she has in the cloth a stone that weighs four or five pounds.
He stands in a hole up to his waist, and his club is as long as her sling. [source]

That is correct. Trial by Combat was available to women—at least, it was as late as 15th century Germany. Supposedly, this was a method used by married couples to settle disputes...serious disputes. Since men were considered the superior sex, something needed to be done to even the odds between them, hence the hole in which he stands, reducing his mobility. Note also that they do not use cutting weapons: their blunt instruments are intended to bludgeon the opponent into submission, not cause the opponent to bleed to death.

Remember that non-aristocracy had to seek permission from a court to engage in a lawful Trial by Combat; hence the term "judicial duels." Husbands and wives could not just decide to dig a hole in the front yard and fight it out amongst the neighbors. There are no known recorded examples of such trials or their outcomes, but the casual way in which Talhoffer describes his sample fight (there are more illustrations in his manuscript) suggests that there was nothing shocking about this in his time.
Posted by Daily Medieval at 7:00 AM