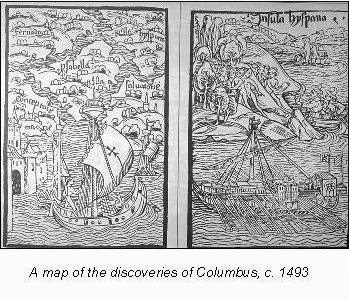 Christopher Columbus is about as late as a "medieval" blog should deal with, but to me it seems appropriate. The world that Columbus sailed from was still very much entrenched in the culture and technology of the Middle Ages (even though its artworks are considered part of the Renaissance). But the discovery of a new continent—and the new era of exploration of which it was a part—made radical changes to any remaining "parochial" attitudes of the Old World.

But what was the plan for the land he was to find? Was there a plan? Didn't he intend simply to find a new route to India for trade purposes?

Maybe not. On 4 May 1493, Pope Alexander VI (1431-1503) issued a papal bull, Inter caetera [Latin: "Among other (works)"], which granted to the kingdoms of Spain (Castile and Aragon) all lands west and south of a line 100 leagues west of the Azores or Cape Verde islands. If you look at the map below, the line on the right shows the boundary, west of which the lands belonged to Spain. Everyone involved realized very quickly that Columbus had discovered new lands, not the expected ones.

Portugal objected to this authority granted to Spain. It felt it had some precedent for authority over these new lands.

Inter caetera was not the first papal bull regarding the disposition of the New World. Pope Nicholas V (1397-1455) had presented a bull on 18 June 1452 called Dum diversas [Latin: "Until different"], allowing Alfonso V of Portugal (1432-1481) to seek out and capture pagans and seize their kingdoms. Portugal believed that Spain's rights granted by Inter caetera conflicted with Portugal's rights granted by Dum diversas. Spain and Portugal tried a diplomatic solution, to no avail. Spain urged the Pope (who was Spanish) to help. The result was a new bull, Dudum siquidem [Latin: "A short while ago"] that gave Spain:


all islands and mainlands whatsoever, found and to be found, discovered and to be discovered, that are or may be or may seem to be in the route of navigation or travel towards the west or south, whether they be in western parts, or in the regions of the south and east and of India. [Dudum siquidem, 26 September 1493]

The intent was clear, and Spain started sending conquistadors.

In truth, there were several bulls over the years that granted authority to different countries to take over other lands. A specific subset of these dealing with the New World is known collectively as the "Bulls of Donation." Spain and Portugal finally came to an agreement with the Treaty of Tordesillas in 1494, dividing up the New World between them.
Posted by Daily Medieval at 7:00 AM