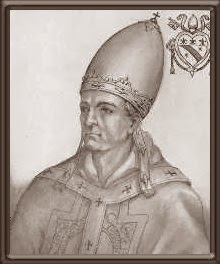 The growing power and importance of Sicily in the Middle Ages was mentioned here. But the solution they found didn't quite last; controlling Sicily was an ongoing issue for many. Generations later a different pope faced the "problem of Sicily." That was Pope Nicholas IV.

Nicholas (born Girolamo Masci, 1227-1292) was a humble Franciscan friar before he was elected the first pope from the Order founded only 79 years earlier by Saint Francis.

In the four years that he was pope, he had few ambitions. Resolving the current Sicilian question was one. There were two men claiming control of Sicily, Charles II of Naples and James II of Aragon. Unfortunately for James (who was actually resident in Sicily), Charles promised to recognize the pope's suzerainty over Sicily—meaning that Sicily would be beholden to the papal state and offer it regular tribute. Charles, therefore, got the pope's blessing, and Nicholas brokered a treaty with King Philip IV of France and King Alfonso III of Aragon to expel James II from Sicily.

No sooner had the Pope completed this task than another concern reared its head: the kingdom of Acre in the Middle East fell to the Mamluks. Failing to get a Crusade started, Nicholas sent missionaries to the east to increase Christian conversions.

He also made some financial changes in the Vatican. One of them was to disburse among the cardinals one-half of the Vatican's income. As it turned out, the power this gave to the College of Cardinals would create problems for later popes. Nicholas also created a detailed system of evaluation and taxation for English and Welsh parishes. The records created for his Taxatio provide historians with a valuable look at the status of English and Welsh churches at the end of the 13th century.

He died peacefully on 4 April 1292, at the age of 64.  His death would trigger the difficulties that led to the story of the Pope Who Quit.
Posted by Daily Medieval at 7:00 AM