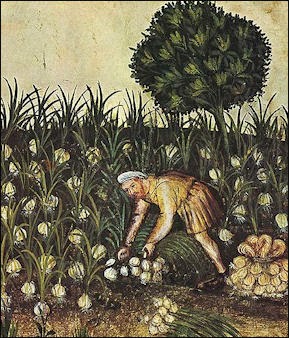 As best we can determine, Symposius was a 4th- or 5th-century author of the Ænigmata, a collection of 100 Latin riddles. The oldest known collection of riddles, they have influenced other riddle-makers through the ages, such as Aldhelm.

Why are we talking about Latin riddles in a post titled "Anglo-Saxon Riddles"? Because without Symposius we might have a more difficult time guessing at some of the Riddles of the Exeter Book. Consider Exeter Book Riddle #61:

This might have been more difficult if we did not have Symposius' example #94:

Now may you see, though not believe, I fear,
One eye and many thousand heads are here,
Whate'er he has, he sells. Whence comes what don't appear?

The answer is the same for both, and I will give it to you in footnotes, along with the answers to the rest. Enjoy.

#18
My garment is darkish.     Bright decorations,
red and radiant,     I have on my raiment.
I mislead the stupid     and stimulate the foolish
toward unwise ways.     Others I restrain
from profitable paths.     But I know not at all
that they, maddened,     robbed of their senses,
astray in their actions     —that they praise to all men
my wicked ways.     Woe to them then
when the Most High holds out     his dearest of gifts
if they do not desist     first from their folly.


#31
I saw a thing     in the dwellings of men
that feeds the cattle;     has many teeth.
The beak is useful to it;     it goes downwards,
ravages faithfully;     pulls homewards;
hunts along walls;     reaches for roots.
Always it finds them,     those which are not fast;
lets them, the beautiful,     when they are fast,
stand in quiet     in their proper places,
brightly shining,     growing, blooming.

Source for Symposius
Source for Exeter riddles
Posted by Daily Medieval at 6:24 AM