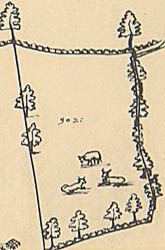 In England there are still many "Commons" that are accessible by locals for grazing their animals. Their origin can be summed up in simple terms:


Farmers who owned animals needed to have somewhere to graze them. In the early medieval period there was plenty of waste land which could be used for grazing. But later on more people [...] needed more food. More waste land was ploughed up for arable crops, and it became necessary to limit the number of animals that could be grazed. [source]

The Modern English word "stint"—meaning to be frugal about something, or to limit one's access—originally referred to the limitations put on how much grazing each tenant could enjoy.

It was not just open land that could be used for grazing. Once the fields were cleared, animals were allowed to graze on the stubble. There were rules, so that no one had a head start on this grazing. In one instance, the church would ring its bell when the harvest was done and grazing was allowed. Grazing could continue until 15 October, when the land had to be prepared for the spring planting. Once crop rotation was being practiced, there was always a fallow field that animals could be put on afterward.

One scholar believes that commons were a tradition begun in neolithic times, and maintained during the era of Roman Britain. She believes the commons were places where communities not only grazed beasts:


Post-medieval folklore suggests that these meetings may have been accompanied by games and competitions, the making of marriages and other formal agreements between groups, and opportunities to catch up between members of extended families. [source]

There are still many commons in England today, maintained as part of English tradition.
Posted by Daily Medieval at 7:00 AM