Life with the Huns 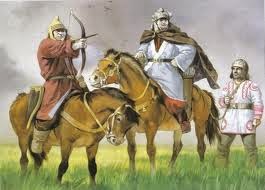 A 6th century Roman politician named Jordanes turned to writing history in his retirement. He wrote Romana, about Rome, and Getica, about the Goths (of whom he was one). He is the best contemporary source we have for information about the Goths.

In the Getica he tells us about one of the rivals of the Goths, the Huns. He obviously looked down on them as savages (I imagine this was similar to the way Romans looked down on Goths when the Goths approached Rome to conquer it). He claims that their origin was with the Goths themselves, when a Goth ruler expelled witches from the tribes. These witches wandered until:


There the unclean spirits, who beheld them as they wandered through the wilderness, bestowed their embraces upon them and begat this savage race, which dwelt at first in the swamps, -- a stunted, foul and puny tribe, scarcely human, and having no language save one which bore but slight resemblance to human speech. Such was the descent of the Huns who came to the country of the Goths. [Goths, Chapter 24]

The Huns were ferocious in actions and appearance:

For by the terror of their features they inspired great fear in those whom perhaps they did not really surpass in war. They made their foes flee in horror because their swarthy aspect was fearful, and they had, if I may call it so, a sort of shapeless lump, not a head, with pin-holes rather than eyes. Their hardihood is evident in their wild appearance, and they are beings who are cruel to their children on the very day they are born. For they cut the cheeks of the males with a sword, so that before they receive the nourishment of milk they must learn to endure wounds.

Hence they grow old beardless and their young men are without comeliness, because a face furrowed by the sword spoils by its scars the natural beauty of a beard. They are short in stature, quick in bodily movement, alert horsemen, broad shouldered, ready in the use of bow and arrow, and have firm-set necks which are ever erect in pride. Though they live in the form of men, they have the cruelty of wild beasts. [Ibid.]

Jordanes had no trouble describing them as inferior despite the problems they caused for Rome. Tomorrow we will look at what happened when the Huns under Attila turned their sights back to Rome five years after they negotiated a treaty.
Posted by Daily Medieval at 7:00 AM