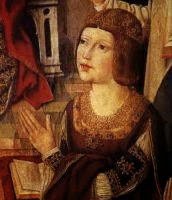 Queen Isabella of Castile had a reputation for harshness when it came to crime and corruption. A Spanish writer and contemporary, Hernando del Pulgar (1436 - 1492), who became a councillor under Isabella, wrote a series of profiles of political figures and said of her:


She was very inclined to justice, so much so that she was reputed to follow more the path of rigor than that of mercy, and did so to remedy the great corruption of crimes that she found in the kingdom when she succeeded to the throne.*

Her predecessor, her half-brother Henry, was not a careful ruler: big on spending money, not big on maintaining the rule of law (hence the attempts by the nobles to dethrone him, using Isabella as their focus). Isabella had to get tough to restore order to Castile.

Her first reform was to co-opt La Santa Hermandad [The Holy Brotherhood]. The Brotherhood was a  feature of medieval Castile in which local armed men formed vigilante groups to maintain order in the communities. Isabella developed the Brotherhood into a local police force for each territory. They were paid by a new tax. The province of Galicia, known for highway robbery, had 1500 robbers driven out by a special force she sent with the task of cleaning up the area.

She also needed to restore the financial health of the country after Henry's excesses. Henry raised quick cash by selling property at low prices. The decision was made to purchase them back at the same low prices. Estates that Henry gave to others as gifts were taken back without remuneration. Some nobles who wished to regain the property could do so by paying a sum worthy of the property; this helped fill the treasury. She also reduced the number of mints making coins, which reduced rampant inflation.

Her final change was in the area of royal engagement. Isabella and Ferdinand spent some time each Friday allowing citizens to come to them with complaints. This was a form of contact with royalty and royal concern for the constituency previously unknown in Castile.

The year 1492 is, however, the year of events for which history usually thinks of her. Schoolchildren know her for her support of Columbus, and others condemn her for the Alhambra Decree, but she was the best ruler her country had seen in awhile.