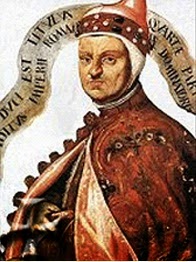 This past Saturday, the 21st of June, was the anniversary of the death of Enrico Dandolo, the 42nd Doge of Venice. His tenure as Doge had great significance for Venice, and had disastrous consequences for Constantinople.

Born about 1107, he had a successful career as a diplomat who came to true prominence in 1171 when Constantinople imprisoned all Venetians and confiscated their property. The Doge at the time, Doge Vitale II Michiel, gathered a force to attack Constantinople, but the plan failed when plague in 1172 killed many in the expedition. Michiel was killed on his return to Venice by the angry citizenry, but the returning Enrico Dandolo was made ambassador to Constantinople. A treaty was finally brokered in 1186, but the enmity between Venice and Constantinople remained, as we shall see.

In 1192, Dandolo became the 42nd Doge. By this time, he was in his 80s* and blind—one contemporary chronicler (Geoffrey de Villehardouin) claimed it was due to a head wound—but his cleverness made him the popular choice, and his actions over the next decade justified it. He reformed Venetian currency, creating new coins of different denominations. One coin, the grosso, was consistently minted with 98.5% pure silver, making it a reliable standard for trade in the Mediterranean and increasing the economic prestige of Venice.

His biggest impact on history, however, came during the 4th Crusade. In the next few posts we will take a look at the 4th Crusade and why it went horribly wrong.

*This is an assumption; one scholar believes he has clear evidence for 1107 as the year of Dandolo's birth, but the level of activity he showed after becoming Doge prompts some to think he must have been a younger man.
Posted by Daily Medieval at 7:00 AM