And God said to the soul:
I desired you before the world began.
I desire you now
As you desire me.
And where the desires of two come together
There love is perfected.
—Mechthild of Magdeburg* 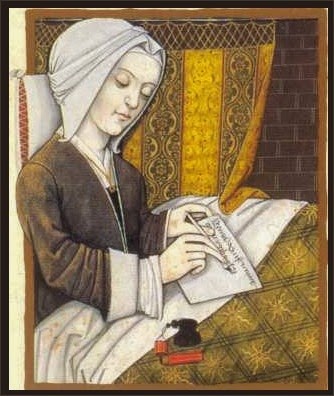 Mechthild (Matilda) of Magdeburg has been mentioned a couple times this week as an exemplar of mysticism whose story was translated and shared by Henry of Nördlingen with other mystics.

She was born about 1210 in Saxony. At the age of 12, the Holy Spirit made her acquaintance and visited her daily. Her interactions with the Holy Spirit prompted her to leave home about 1230 and go to Magdeburg to join the Beguines, a group of lay Christians who lived in semi-monastic communities and vowed not to marry.

Her visions and revelations continued, and she was convinced by her confessor, Henry of Halle, to record them. She wrote a book which God wanted her to call Fliessende lieht miner gottheit in allu die herzen die da lebent and valscheit ["Light of my divinity, flowing into all hearts that live without guile"], but is now known as
Das fliessende Licht der Gottheit ["The Flowing Light of Godhead"], which became an inspiration for other mystics in the decades to follow. Her writing is interspersed with the occasional poem, such as the one above.

Some of her ideas were enlightening for the Middle Ages trying to understand the afterlife:

Some have suggested that her vision of the three helped to inspire Dante's Divine Comedy. In Canto XXVIII of Purgatorio, there is a Matilda gathering flowers. This figure is usually identified as Matilda (1046-1114), a Grancontessa of Tuscany, who supported several popes, but a "Matilda" who lived much closer to Dante and was known for her religious visions might be a better identification.

In 1270, she joined the Cistercian nuns at Helfta, and was respected by all. Some think she lived until the 1290s, but there are no definitive records of her after 1282.

*From Teachings of the Christian Mystics, edited Andrew Harvey
Posted by Daily Medieval at 7:00 AM