The Doge of Venice 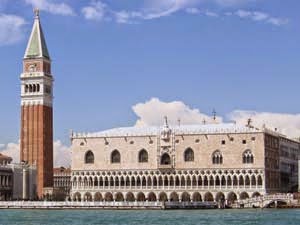 The title is based on the Latin dux ["military leader"], from which the word "duke" comes. The Doge was not a hereditary position, but was elected for life (unless circumstances led to being forcibly ejected from the position), usually from the pool of very smart elders.

The Chronicon Venetum ["Chronicle of Venice"] by John the Deacon says the first Doge was elected about 700 as part of Venice's development as a Republic and to oversee the rivalries between the tribunes (the small number of elected positions that shared the rule of Venice). The first Doge was Paolo Lucio Anafesto (697-717) (but there is a lot of doubt as to the accuracy of this; that name is known to be the same as the Exarchate [ruler] of Ravenna.)

Some notable Doges:
Agnello Participazio (811-827), who was exiled to Zara by his son, Giustiniano, who became Doge
Pietro IV Candiano (959-976), who gave himself special privileges and powers with the support of Otto I, but lost that protection after Otto died, and found himself locked in his palace by the citizens of Venice, who then set fire to it.
Pietro II Orseolo (991-1009), who expanded Venice's influence eastward, freeing Venice from 50 years of taxation imposed by the Narentines on the east coast of the Adriatic Sea; he married the niece of Pietro IV Orseolo, Maria Candino, who became his dogaressa.

But the shrewdest old Doge of them all may have been the 42nd, Enrico Dandolo, who took over a Crusade and used at as a weapon for his own purposes. That's a story for tomorrow.