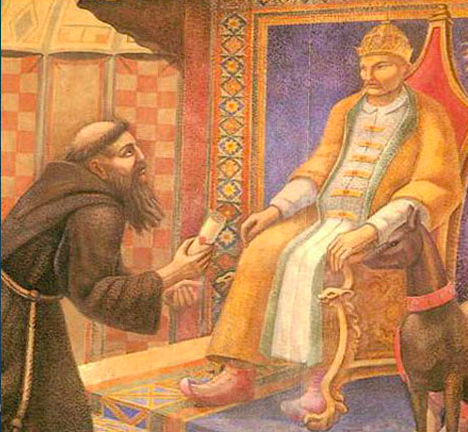 Marco Polo was not the only, or the first, western European to travel to the East. When Pope Innocent IV wanted to send a letter to the Great Khan of the Mongols, who was persecuting Christians, he sent it with Giovanni da Pian del Carpine (sometimes called Friar John of Plano Carpini).

Giovanni was born about 1182 in Umbria, Italy. He was a companion of St. Francis of Assissi, and therefore one of the first Franciscans. He was instrumental in the Franciscan missions to Northern Europe. Pope Innocent chose Giovanni to carry a letter to Ögedei Khan, after Mongol forces made serious inroads into Europe at the Battle of Legnica in 1241.

Giovanni was about 65 years old at the time of this journey. The letter and its reply were discussed here. What interests us more about Giovanni is that he recorded what he saw in the Ystoria Mongolorum ["History of the Mongols"]. (Keep in mind that this is all happening more than a generation prior to Marco Polo's trip.) He records many of their customs and past events, such as in Chapter Four, "Their Good and Bad Customs, their Food and their Habits":


The aforesaid men ... obey their lords more than anyone else in the world, whether clergymen or laymen, and they respect them greatly and do not easily lie to them. The Tartars seldom argue to the point of insult, and there are no wars, quarrels, injuries or murders among them. In fact, there are no robbers and thieves of valuables there, so that the camps and carts where they keep their treasures are not protected by locks or bars.

Their women are chaste, and one never hears scandals about them, though they tell coarse and vulgar jokes.

For his efforts on behalf of the pope and Christendom, Giovanni was made Primate of Serbia. He died on 1 August 1252, two years before Marco Polo was even born.
Posted by Daily Medieval at 6:30 AM