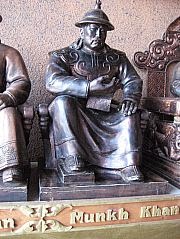 Among the western Europeans who traveled eastward and wrote of the wonders of "The Orient," we have mentioned William Rubruck (c.1210 - 1270), who traveled to Karakorum, the capital of the Khans. The Khan at the time was Möngke Khan.

Möngke was a grandson of Genghis Khan. He ruled the Mongol Empire from 1251 to 1259, and was succeeded by another of Genghis' grandsons, Kublai Khan. During his reign, Möngke continued to conquer more territory and bring it under Mongol control.

He was also a politician who cared about proper governance of the empire. One of the things that needed correction was the Mongol monetary system. Paper money (first authorized by Genghis shortly before his death in 1227) was being printed and issued without control since the reign of Ögedei Khan. (Ögedei was himself childless, and Möngke and Kublai had been raised at his court.) Möngke created a Department of Monetary Affairs in 1253 to control the printing of paper money and create currency standards. An empire-wide silver standard was established—the sukhe, a silver ingot that could be divided into 500 sub-denominations—although conquered territories could continue to mint their own traditional denominations. Eventually, coins of other metals were introduced.

As for William Rubruck's mission to convert people to Christianity: Mongke was busy, and refused even to see William for many months. Möngke was probably aware of Carpini's envoy to Güyük Khan's court in the previous decade, carrying a letter from the pope that chastised the Khan. When he finally received William, a debate ensued in which William did not fare well. Möngke decided that they should all write down their questions and have a formal debate. This took place a year later, with arguments being put forward before three judges: a Christian, a Muslim, and a Buddhist. The affair became heated. Möngke finally summed up:


"Just as God gave different fingers to the hand so has He given different ways to men. To you God has given the Scriptures and you Christians do not observe them". He explained God had given the Mongols their shamans. [Genghis Khan and the Making of the Modern World, By J. McIver Weatherford]

Möngke died on 11 August 1259, while conducting a war in China. His death led to a four-year civil war between two younger brothers, at the end of which Kublai defeated Ariq.
Posted by Daily Medieval at 6:30 AM