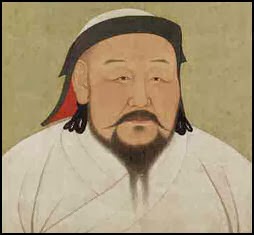 Today is the anniversary of the death of Kublai Khan (1215 - 1294), grandson of Genghis Khan. During his 34-year reign (he was crowned on 5 May 1260, succeeding his brother, Möngke Khan), he accomplished many notable things.

One was establishing the Yuan dynasty and extending his rule over one-fifth of the inhabited land area of the world. Before his death he had become not only the ruler of Mongolia but also the first non-Chinese Emperor of China.

He was known for curiosity about other religions and countries that led to great tolerance of foreigners. The reputation of Tibetan monks as healers inspired him to add a Tibetan priest to his retinue. He showed great interest in Christianity, requesting that the pope send him 100 priests and some relics of Christ. (He didn't get them.) He was a Buddhist who did not appreciate Taoism, but he did show respect for Taoism, putting Taoist temples under the jurisdiction of his "Academy of Scholarly Worthies." Kublai also had 30 Muslims in his administration, some of whom were governors of provinces.

He was attentive to infrastructure needs, rebuilding the Grand Canal (at 1104 miles, the longest canal in the world, linking the Yellow and Yangtze Rivers). He also repaired highways and public buildings. He extended taxation to Mongol merchants.

Paper currency had been used by this time for a generation or two, but Kublai established a uniform currency throughout his territory. Based on silver and gold, the paper money could be converted at any time. Later, however, Kublai needed to produce more money for some of his plans, and issued new notes that were not backed by precious metals. This example of fiat money (possibly the first in the world) would always be accepted by the government.
Posted by Daily Medieval at 7:00 AM