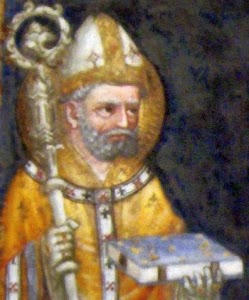 The post about Julian the Hospitaller mentioned its source in the Legenda Aurea ["The Golden Legend"] of Jacobus de Voragine. It was about time to get around to one of the most popular works of the Middle Ages.

Originally called Legenda sanctorum ["Legends of the saints"], it was written by Jacobus de Voragine (c.1230 - 1298). Born in Varazze on the northwest coast of Italy,* Jacobus became a Dominican and teacher in 1244. He was active in several roles in the Order, including being offered to be made archbishop of Genoa, a position he initially refused. In 1292 he finally agreed, and was invited to Rome by Pope Nicholas IV. Unfortunately, when he reached Rome the pope was very ill and unable to perform the ceremony. It took a little while to find a replacement, during which time the cardinals chose to consecrate Jacobus in his new title. As Archbishop of Genoa, he worked to reconcile the conflict between the Guelphs and Ghibellines. He also repaired churches and monasteries, enforced discipline in the clergy, and made an Italian translation of the Bible (now lost).

He also wrote extensively: sermons on saints, a book on the Gospels, a book on all aspects of the Blessed Virgin Mary, a defense of Dominicans, and a summary of the virtues and life of Dominican William Perrault. His most enduring contribution to posterity was the collection of saints' tales now called The Golden Legend, which will be a good topic for tomorrow.

He died of natural causes, and was beatified by Pope Pius VII in 1816.

*"de Voragine" is the Latin for "from Varazze."
Posted by Daily Medieval at 7:00 AM