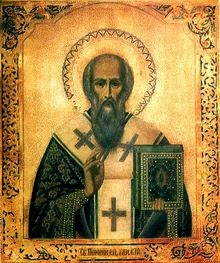 Gaza is currently the largest city in Palestine with over a half-million inhabitants. Its history stretches back more than 3000 years, its government having passed from Egyptians to Philistines to Romans to Byzantines and more.

At one stage in its history it was converted to Christianity, and the person given credit for that conversion is known as Saint Porphyry of Gaza. His story comes to us from the Vita Porphyrii ["Life of Porphyry"] by Mark the Deacon, an Egyptian monk who was a contemporary and assistant to Porphyry.

Gaza had been in Roman hands at the time—with several temples consecrated to the Roman gods—and the hostility of the Byzantine Emperor Diocletian (303-313) and Emperor Julian (362-363) to Christians created an environment that led to many Christian martyrs and the destruction of their places of worship. According to the Vita, a 45-year-old Porphyry was made bishop of a Gaza with fewer than 300 Christians and an atmosphere so unfavorable to them that their church had been built far outside the walls of the city. A drought the following year was even blamed on Porphyry's presence.

In 398, therefore, Porphyry sent his deacon, Mark, to Constantinople to ask the (now friendly to Christians) Emperor Arcadius for help. Soldiers arrived to close the pagan temples, but a bribe to their leader caused them to leave the major pagan temple open. Also, just closing the temples did not do anything to change the attitudes of the pagans toward the Christians. Discrimination continued, so Porphyry himself went to Constantinople and convinced Arcadius' Empress Eudoxia to get from Arcadius an order to destroy the pagan temples in Gaza. This time the destruction of pagan temples and pagan artifacts—including personal effects from homes—was total.

Discrimination continued; whomever was in power in the ensuing centuries oppressed the native inhabitants, who fought back against the authority.
Posted by Daily Medieval at 7:00 AM