[We pause in our discussion of The Golden Legend to share an entry from it.] 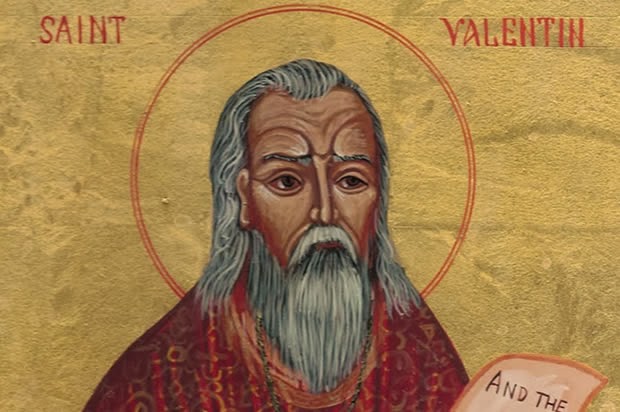 Here beginneth the Life of Saint Valentine, and first the interpretation of his name.

Valentine is as much to say as containing valour that is perseverant in great holiness. Valentine is said also as a valiant knight, for he was a right noble knight of God, and the knight is said valiant that fleeth not, and smiteth and defendeth valiantly and overcometh much puissantly. And so Saint Valentine withdrew him not from his martyrdom in fleeing, he smote in destroying the idols, he defended the faith, he overcame in suffering.

Of Saint Valentine the martyr.

Saint Valentine, friend of our Lord and priest of great authority, was at Rome. It happed that Claudius the emperor made him to come tofore him and said to him in demanding: What thing is that which I have heard of thee, Valentine? Why wilt thou not abide in our amity, and worship the idols and renounce the vain opinion of thy creance? Saint Valentine answered him: If thou hadst very knowledge of the grace of Jesu Christ thou shouldest not say this that thou sayest, but shouldest reny the idols and worship very God. Then said to Saint Valentine a prince which was of the council of the emperor: What wilt thou say of our gods and of their holy life? And Saint Valentine answered: I say none other thing of them but that they were men mortal and mechant and full of all ordure and evil. Then said Claudius the emperor: If Jesu Christ be God verily, wherefore sayst thou not the truth? And Saint Valentine said: Certainly Jesu Christ is only very God, and if thou believe in him, verily thy soul shall be saved, thy realm shall multiply, and he shall give to thee alway victory of thine enemies. Then Claudius turned him unto all them that were there, and said to them: Lords, Romans, hear ye how wisely and reasonably this man speaketh? Anon the provost of the city said: The emperor is deceived and betrayed, how may we leave that which we have holden and been accustomed to hold sith our infancy? With these words the emperor turned and changed his courage, and Saint Valentine was delivered in the keeping of the provost.

When Saint Valentine was brought in an house in prison, then he prayed to God, saying: Lord Jesu Christ very God, which art very light, enlumine this house in such wise that they that dwell therein may know thee to be very God. And the provost said: I marvel me that thou sayest that thy God is very light, and nevertheless, if he may make my daughter to hear and see, which long time hath been blind, I shall do all that thou commandest me, and shall believe in thy God. Saint Valentine anon put him in prayers, and by his prayers the daughter of the provost received again her sight, and anon all they of the the house were converted. After, the emperor did do smite off the head of Saint Valentine, the year of our Lord two hundred and eighty. Then let us pray to Saint Valentine that he get us pardon of our sins. Amen.