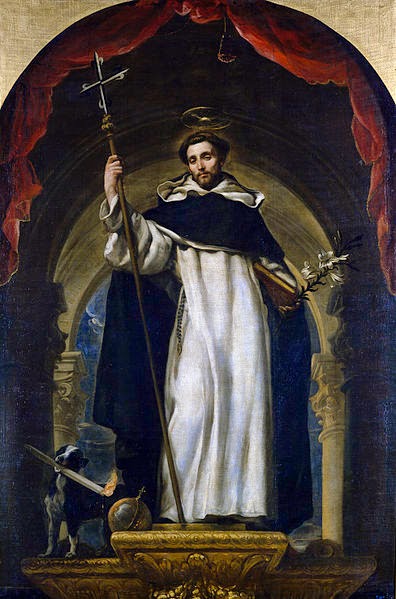 The Dominicans have been mentioned many times, and their founder has been mentioned as a friend of Simon de Montfort, but his life deserves a little more attention.

St. Dominic is most often referred to (prior to canonization, that is) as Dominic Guzmán. He was born in 1170 in Castile, and was supposedly named for an earlier St. Dominic.* Nothing reliable is known of his family, since the earliest chroniclers had no interest in his parents and later chroniclers naturally tried to make his parentage sound impressive.**

In 1191, when Spain was suffering from famine, the young university student Dominic sold all he owned—including his clothes—for money to feed the starving poor. A few years later he joined the Canons Regular, who followed the rule of St. Augustine.

In 1215, the year of the Fourth Lateran Council (mentioned here and other places), Dominic and six disciples started their own house in Toulouse with some monastic rules, and were given permission by the local bishop to preach in Toulouse. That same year, Dominic and the bishop went to Rome to request permission for the founding of a new order to combat heresy; it was given by Pope Honorius III in the winter of 1216/17 and called Ordo Prædicatorum ["Order of Preachers"] (which is why, although referred to as "Dominicans," they have the initials "OP" after their names).

Interest in his order grew, and although his headquarters was in Rome where the pope had given the Dominicans a house, Dominic constantly traveled to keep in touch with the various chapters. We are told that he abstained from meat and excessive food and talking, and that he never allowed himself to sleep in a bed. The use of the rosary is attributed to him: it was known earlier, but he certainly promoted it as a guide for prayer.

His icons, seen in the picture above, are the lily for his chastity, the book and staff representing his authority to preach (supposedly granted to him by a vision of Saints Peter and Paul), and the star above his head. The star was seen by his mother in a vision before he was born; because of it, he is considered the patron saint of astronomers. The last symbol, also seen by his mother in a vision, is the dog with the torch in its mouth, representing that he was to "set fire to the earth" with his preaching. This ties directly to the Dominican connection to the Inquisition, which will get its own post in the near future.

*St. Dominic of Silos (1000 - 1073), who had been abbot of a monastery a few miles from Dominic's birthplace.
**The name eventually given to Dominic's mother was Joan of Aza, and that name was beatified in 1828 by Pope Leo XII.


http://en.wikipedia.org/wiki/Saint_Dominic
Posted by Daily Medieval at 7:00 AM