A King in Hiding 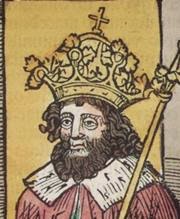 Władysław III of Poland was born on 31 October 1424. He was named King of Poland when he was 10 years old and King of Hungary at the age of 16.

Very young kings are usually surrounded by advisors who often want to enjoy and consolidate their own power, rather than offer unselfish loyalty to king and country. Cardinal Olešnicki ran the country more than Władysław did, insulating the young king from reality and the ability to make sound judgments.

Therefore, when Władysław was 18 and had become King of Hungary after a two-year war (the widow of the previous king wanted to keep the throne for her infant son and not see it go to a Polish monarch), he decided to keep his army together and attempt a greater prize.

The Christian Władysław decided it would be a glorious undertaking to attack the pagan Turks in a crusade, breaking a ten-year truce with the powerful Ottoman Empire. Plans were made, and promises were gathered from Venice and papal forces for help. Unfortunately for Władysław, the mercenary Venetians also had an arrangement with the Turks, and used their fleet to ferry 60,000 Turks from Asia to where Władysław's army (of only 20,000) was camped. The end result was the Battle of Varna on 10 November 1444. The Polish army was defeated soundly and Władysław was beheaded.

Rumors that his head was taken to the Ottoman court are not substantiated. His own forces never found his body. A strange Portuguese legend accounts this. Supposedly, Władysław, ashamed of starting a disastrous war on false pretenses, snuck away from the losing battle and wandered as an ordinary pilgrim to the Holy Land, looking for forgiveness. He became a Knight of Saint Catherine of Mount Sinai. He later traveled to Madeira (an island west of Portugal) to live a quiet life, becoming known as Henry the German. Hearing the rumor that Władysław was alive and hiding in Madeira, a group of Polish monks traveled to investigate. They were satisfied that he was Władysław, but he would not be persuaded to return to Poland and ascend the throne.
Posted by Daily Medieval at 7:00 AM