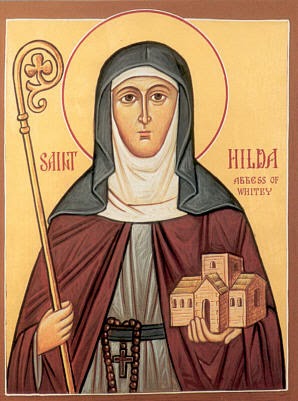 The Synod of Whitby is a familiar name to fans of medieval history (and this blog). What is not widely known is that it was first managed by a woman, Hilda of Whitby.

Hilda (c.614 - 680) was born to Hereric, a nephew of King Edwin of Northumbria. Her father was poisoned while Hilda was very young, and she was raised at King Edwin's court, where she was exposed to the preaching of St. Paulinus of York. King Edwin's entire court, including Hilda, was baptized on Easter (12 April) 627. Hilda's sister, Hereswith, became a nun at Chelles Abbey, and Hilda followed her example by taking up the monastic life.

She eventually wound up taking on the management of a monastery at a coastal town called Streaneshalch in 657, which had just been founded by Oswy of Bernicia as an act of thanksgiving. Years later, the Danes would name the place Whitby (Old Norse for "white settlement").

The monastery at Whitby—which included both men and women—became famous for its learning. This was the home of Cædmon, the illiterate shepherd turned poet; Hilda allowed him to take monastic vows and encouraged him in his poetry. Her wisdom and administrative abilities were so revered that monks and aristocracy would travel to consult with her. Bede tells us that "All who knew her called her mother because of her outstanding devotion and grace."

When King Oswy wanted to determine definitively whether his realm should follow Celtic or Roman Christianity, he asked Hilda to hold the synod at her abbey. The Synod of Whitby presented arguments for both sides, and Oswy chose Roman Christianity. Hilda preferred Celtic Christianity, but she accepted the decision of the king.

Hilda died on 17 November 680, after several years of suffering from a constant fever that never stopped her from performing her duties. Supposedly, at her death the bells of the monastery rang out so loudly that they were heard 13 miles away.
Posted by Daily Medieval at 7:00 AM