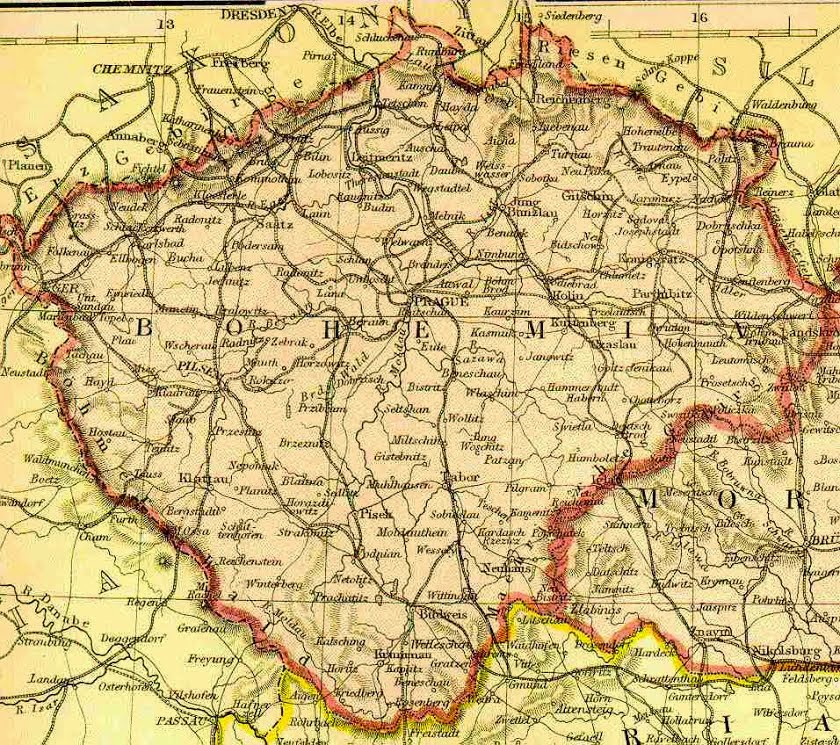 Bohemia, the home of Wenceslaus and where Jan Hus found support, was named from a Roman account. The names of both Bohemia and its neighbor Bavaria are based on their connection to the Celtic Boii tribe. The Roman historian Tacitus referred to the area where the tribe lived as Boiohæmum, based on the tribal name Boi- and the Germanic haimaz ["home"; whence comes the German suffix -heim and English home].*

That is not, however, the origin that the Middle Ages believed. According to the Chronica Boëmorum [Chronicle of Bohemians"] by Cosmas of Prague, the Bohemians originally lived harmoniously, without alcohol or marriage, private property or weapons. Eventually, however, evil arose, and they needed someone to lead them out of their iniquity.

Out of this growing chaos came Krok; Cosmas says Krok was


a man known for his age, absolutely perfect, rich and worldly in his judgements, and sophisticated. This wonderful man had no male heirs, but rather three daughters, whom nature had granted the treasures of wisdom.

That is all Cosmas says about the legendary Duke Krok, although he does tell stories about his three daughters: Libuše, Kazi, and Teti—especially Libuše, the youngest and wisest (possibly the wisdom was inherited from her equally legendary Elven mother). Libuše foretold the city of Prague, and married a ploughman named Premysl, with whom she founded the Premyslid Dynasty (ruling Bohemia from the 9th century to 1306). A film was made about Libuše in 2009.

To Cosmas, writing in the early 12th century, the story of the founding of Bohemia needed one more element: an explanation for the name. He therefore mentions Duke Krok's companion, Duke Bohemus, whose name was given to the country.

...and that was the first and last mention of Bohemus made in chronicles. Once his name was produced to explain the name of the country, he was not needed ever again.

*I am resisting the temptation to call the Bohemians "Home-Bois."
Posted by Daily Medieval at 7:00 AM