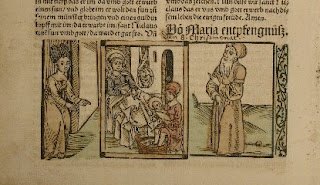 When Guy de Chauliac mentioned midwives in his great work on surgery, it was only a mention: he declined to express details because the field was dominated by women; men were not even allowed into the room when a woman was giving birth. In fact, "One Henne Vanden Damme, for having hid behind a staircase to eavesdrop upon his wife, she being in labour of childbirth, which thing doth not befit a man, for the said eavesdropping was fined 15 livres." [source]

Later in the Middle Ages, there was regulation of midwifery, but midwives, unlike doctors, were not associated with any formal training. In fact, some of the early manuals produced on midwifery—by the rare individuals in the profession who were literate—do not even demonstrate current medical knowledge. Midwives never formed into guilds, as other professions did with regularity. So far as we know, the qualifications for becoming a midwife were gained from on-the-job experience. Even Trotula, the famous female doctor and professor of medicine, discussed many female conditions but not the subject of childbirth.

According to Joseph and Frances Gies:


During labor the midwife rubs her patient's belly with ointment to ease her travail and bring it to a quicker conclusion. She encourages the patient with comforting words. If the labor is difficult, sympathetic magic is invoked. The patient's hair is loosened and all the pins removed. Servants open all the doors, drawers, and cupboards in the house and untie all the knots.
...
When the baby is born, the midwife ties the umbilical cord and cuts it at four fingers' length. She washes the baby and rubs him all over with salt, then gently cleanses his palate and gums with honey, to give him an appetite. [Life in a Medieval City, pp.60-1]

Some historians have noted that the regulation of midwifery started generally around the same time as persecutions for witchcraft. This is, of course, not true in all countries, but it would be difficult to miss the similarity between two different practices of trying to place controls on a segment of society that was in a position of potential harm, either through neglect (on the part of midwives) or design (on the part of witches).
Posted by Daily Medieval at 7:00 AM