Yesterday mentioned the Smithfield Decretals, a detailed work on ecclesiastical law. It was produced in the 14th century, full of important decisions gleaned from the papal decrees of Pope Gregory IX, additional material like the explanation of how to celebrate the feast day of St. Matthias, and curious illuminations. 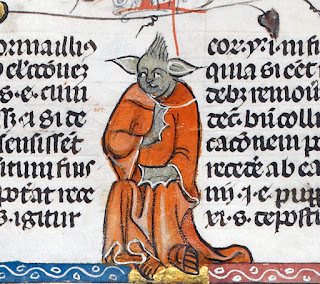 One of these illuminations is of particular interest to fans of Star Wars, because it seems to be an early illustration of Jedi Grandmaster Yoda.

The similarity was first noted by Julian Harrison, curator of pre-1600 manuscripts at the British Library and pointed out in his Medieval Manuscripts Blog. The figure has the grayish-green complexion, the large pointed ears, and the ridged forehead of Yoda's race. Also, the hands, like Yoda's, or not five-fingered. He also wears a long robe.

What are the chances that a specimen from a long-lived race in a galaxy far, far away could travel to Earth and be portrayed in a 14th century manuscript?

The figure perches atop a passage on Samson and Delilah. Although not likely to have been intended as a portrait of Goliath, it may simply be there to evoke the idea of monstrous creatures, such as Goliath would have seemed. Some have suggested that the figure may represent the Devil, tempting Delilah to cut Samson's hair. Or it is just a random figure from the fertile mind of a bored monk. This is a manuscript that includes archer rabbits hunting greyhounds and battling monkeys dressed in armor, after all.
Posted by Daily Medieval at 7:00 AM