We note with sadness the passing of Ray Tomlinson on 7 March 2016, whose name and history are unknown to the general populace but whose innovation is used hundreds of millions of times each day by folk on every continent. Ray Tomlinson, while working as an engineer in Boston, in 1971 was tasked with figuring out uses for the new ARPANET.  He invented a way to send a message from one computer to another; today we call it email. While figuring how to keep, in a line of text, the recipient separate from the address, he chose the @ on his keyboard, since it was used for little else. One article eulogizing Tomlinson said that the @ would probably have fallen out of use and off of keyboard layouts if not for him.

Of course, it was used before Tomlinson to designate a rate, such as "1 apple @25¢."

But...where did it come from?

To the left we see it in a record of a shipment of wheat from Castile to Aragon in 1448. There it was an abbreviation of Spanish arroba, meaning "a quarter" and being equivalent to 25 pounds of weight.

One theory holds that its use in other countries derived from a monastic scribal abbreviation to save space, reducing Latin ad [at, toward, by, about] to an a with a lower-case d curving around it. This would save ink and expensive parchment. 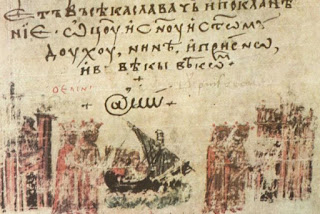 The earliest manuscript in which we find it, however, is a real puzzle. In a 1345 Bulgarian copy of the Greek Manasses Chronicle, a history written by Constantine Manasses (c.1130-c.1187), we find the word "Amen" written as "@men." Why it would be used for an upper-case "a" is unknown. Clearly, the symbol was a known figure that the audience was expected to understand.

In English we call it the "at" sign or symbol, but other languages have different names for it. French, Spanish and Portuguese call it arroba or arobase, a unit of weight (already mentioned). But other countries have more colorful names. Norwegians see a "pig's tale"; Hungarians see a "worm"; it is a "duckling" in Greek and a "rose" in Turkish.
Posted by Daily Medieval at 7:00 AM