Father of His Country 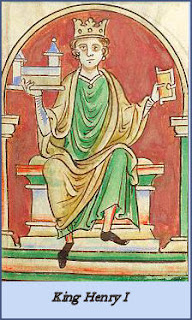 The phrase "Father of His Country" is usually reserved for George Washington, first President of the United States, for his role in the beginning of the system that the USA has today. But Henry I of England (1068 - 1135) was the father of his country in more than a symbolic sense.

As a son of William the Conqueror, his role was to continue the evolution of England to become a mixture of Saxon and Norman culture. When his brother, William Rufus, was killed in a hunting accident, Henry took the throne. He took as his queen Matilda of Scotland, with whom he had at least two children. A daughter, Matilda, was born in 1102 and lived until 1167. William Adelin, born in 1103, died in 1120 in the White Ship tragedy.

Matilda really wanted to be a nun, which may explain why she did not help to fulfill her "duties" to provide many heirs. After her death in 1118, Henry married a young wife named Adeliza of Louvain, with whom he had no children.

Henry had alternatives, however. By several different mistresses (some of whose names we know), he sired several "heirs":

...and that was just the boys. He had, by best estimate from references in historical documents, at least 15 daughters, including:
How is that for a tribute to a first wife?
Posted by Daily Medieval at 7:00 AM

Email ThisBlogThis!Share to TwitterShare to FacebookShare to Pinterest
Labels: Adeliza of Louvain, King Henry I, Matilda of Scotland, William Adelin