Bread has all the characteristics of a staple food: the plant is easy to grow, the product is relatively easy and cheap to produce, and it is adaptable to various shapes and uses. Human beings have been eating it for about 30,000 years, based on residue of starch found on tools used for pounding grain into meal. 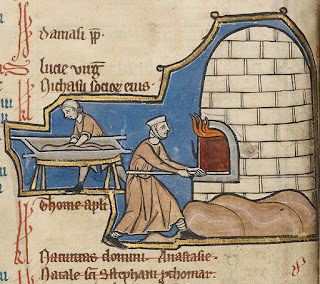 The earliest breads were probably flatbreads, before rising or leavening agents were discovered. Some leavening would take place naturally, by airborne yeasts landing on dough left out. Pliny the Elder reported that Gauls and Iberians added the foam from beer to make bread that was lighter in texture.


Wheat bread agrees with almost everybody, particular varieties made with a generous amount of yeast and salt and allowed to fully ferment and bake well. Such breads are lighter and digest faster. Jizmazaj (thin bread with tamarisk seeds) and ruqaq (very thin bread) are by comparison less nourishing and digest much faster. Bread baked in malla (pit with hot ashes and stones), tabaq (large flat pan) and any other similar varieties that do not ferment or bake well are hard to digest and cause stomach aches. Only people used to strenuous labor can eat them more often.

Bread was considered so important to people and the economy that it was heavily regulated. The Assize of Bread and Ale during the reign of Henry III (1207 - 1272) determined "proper" weight and price and quality of bread.

Bread was such an important part of daily life that the name for someone with whom you spend a lot of time, companion, comes from the Old French compaignon, "one with whom one shares bread" (from Latin com="with" and panis="bread").
Posted by Daily Medieval at 7:00 AM