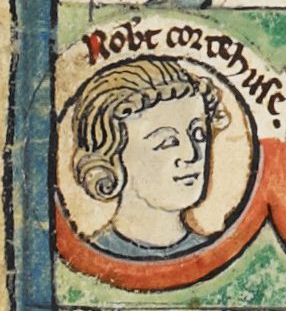 Yesterday's post mentioned Henry becoming king of England upon the death of his brother, William Rufus. Their father was William the Conqueror. William had more than two sons, however. In fact, neither Henry nor William Rufus was his eldest son.

His eldest was Robert Curthose (c.1051 - 3 February 1134). He might have eventually succeeded his father to the throne of England, but his own actions got in the way.

Robert had some admirable qualities, as noted by William of Malmesbury in his Gesta Regum Anglorum [Deeds of the Kings of England]:


...considered as a youth of excellent courage... of tried prowess, though of small stature and projecting belly... he was neither ill-made, nor deficient in eloquence, nor was he wanting in courage or resources of the mind. [Note the "small stature" line; the nickname, "curthose" likely derived from his legs being a little shorter than usual]

But he had a temper. In 1077—still a young man—his younger brothers were bored, and dumped the contents of a chamber pot on Robert from an upper gallery. The boys got into a fight, which their father had to break up. Enraged that his father did not punish the instigators, the very next day Robert tried to capture one of his father's castles, at Rouen. He failed, and fled ultimately to Flanders, where his mother secretly sent him money to support him. His mother, Matilda, arranged a reconciliation between father and son from that lasted from 1080 until her death in 1083, after which Robert left court and traveled Europe.

On William the Conqueror's death in 1087, he left England's throne to William Rufus, and £5000 silver to Henry. To his estranged and difficult eldest son, Robert, he left Normandy—a generous gift considering the troubles between them.

Robert continued to cause trouble for his siblings, however; a story for tomorrow.
Posted by Daily Medieval at 7:00 AM