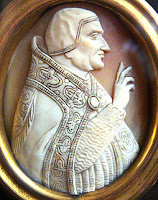 The Plague, also called the Black Death, spread across Sicily shortly after the arrival of a fleet of a dozen Genoese galleys bringing goods from the far eastern end of the Mediterranean. This was in October of 1346. A few months later, in January 1348, galleys from Kaffa (in Crimea) reached Genoa and Venice, where outbreaks also began.

The rest of Europe might have been spared—crossing the Alps would be difficult for the Plague carriers—but one of the galleys was driven away from Italy and found shelter in the port of Marseilles on the southern coast of France. That was the real introduction to continental Europe, after which there was no stopping it.

There is plenty of information about the Black Death to be found online—including in the blog—so there is no need to go into details here. There is, however, a specific event related to the Plague that took place on today's date.

Many populations throughout history, unhappy with their lot, either due to general difficulties or tragedy, have looked for a scapegoat. That scapegoat often takes the form of other people who can be labeled as "outsiders" who are not us and whose presence or actions are hurting us. In the case of the Plague, that scapegoat in many locations was the Jews, who were persecuted and killed, accused of poisoning wells (despite the fact that they drank from the very same sources of water), or of general wickedness that had brought down the wrath of God.

Pope Clement VI was moved to produce a papal bull, Quamvis perfidiam, defending the Jews against the accusations, and urging his fellow Christian prelates to defend them in their territories. It was released on 6 July, 1348. Unfortunately, persecution persisted, and so he re-issued it on 26 September.
Posted by Daily Medieval at 9:00 AM