The picture below was posted on Facebook a few days ago by a long-time friend. (That's his daughter seen to the right of it. Hi, Kyrie!) It is the chapel of St. Illide. As interesting as the chapel is, however, I want to talk about the castle on the hill behind it. 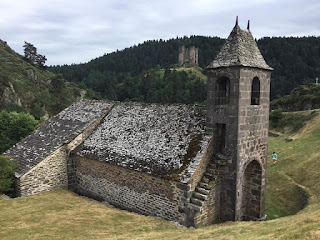 The Château d'Alleuze was built in the 13th century in south central France, looking down on the commune of Saint-Flour. Saint-Flour is named for Florus of Lodève, reputedly the first bishop of Lodève who came to Christianize the area in the 5th century. One of his acts was to strike a rock with his staff, bringing forth water from a spring.

The Château d'Alleuze was built in the 13th century and owned by the bishops of Clermont. Typical for the time, it was built square with round towers at each corner. During the Hundred Years War, it was seized by the Breton Bernard de Garlan, who spent seven years terrorizing the area.

The locals burned down the castle in 1405 to prevent it from being used as a base for future terrorism. This understandably annoyed the actual owner, a Monseigneur De la Tour, who made the locals restore it to its original state. It survived for centuries afterward, being used for, among other things, a jail by the bishops of Clermont.

A ruin now, it was declared in 1927 as an historic monument, and a recommended tourist spot.
Posted by Daily Medieval at 7:30 AM