The King of All Birds 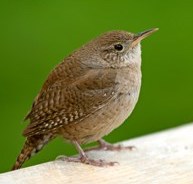 The wren, O the wren, is the King of All Birds.
On St. Stephen's Day he got caught in the furze.

So goes a medieval carol. But why would the diminutive—though disproportionately loud—wren be the king of all birds? The Christians of the Middle Ages had a story for that.

God, wanting to know which bird was the king, challenged them all to a contest. Whichever could fly the highest and farthest would be declared king. They all set off, flying until they dropped from weariness. When the eagle was left, and started to fail, the tiny wren popped out from where it was hiding under the eagle's wing, and won the competition.

Cute, but it looks a little contrived after the fact. Why would the wren be considered king, and therefore need a fable to justify it? And why is it important that it got caught in the furze (gorse) on 26 December? A traditional St. Stephen's Day pursuit is to hunt the wren, kill it, and bury it. The is sometimes still done in England, although these days it is pantomimed with an artificial bird.

The Norse story is that the wren betrayed St. Stephen, leading to his martyrdom; hence the hunting and killing of the wren on his feast day.

There's an older Celtic connection of the wren with the past year; in the Netherlands its name means "winter king" because the European wren sings through mid-winter. The hunting and killing, then, is probably symbolic of getting rid of the old year to make way for the new. Its "kingship" in European/Celtic tradition likely stems from this tendency to keep singing its surprisingly loud song when most other birds have disappeared to warmer climes.
Posted by Daily Medieval at 7:30 AM