In 1307, Philip IV of France arrested several Templar Knights, accusing them of horrible sins. Some of the worst sins took place during a "secret initiation" in which new members supposedly were asked to denounce and spit on the Crucifix, to practice sodomy, and to engage in improper kissing.

Pope Clement V insisted that the captured and excommunicated Knights be brought to him at Avignon to be questioned. The knights were not able to make the journey, so Clement had his emissaries meet them at Chinon. These emissaries included Bérenger Fredoli. The interrogations at Chinon were conducted on 17-20 August, 1308. 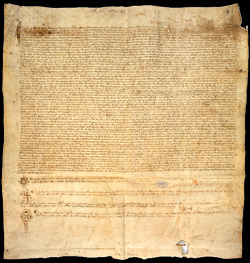 Interrogating the Knights actually turned out some surprising affirmatives. One Knight questioned, Geoffroy de Gonneville, admitted that he was asked to denounce and spit on the Cross, but that he refused and was admitted to the Order anyway. Others admitted to denouncing out loud but not in their hearts.

In 2001, a document known as the Chinon Parchment surfaced in the Vatican Secret Archives. It is the account of the questioning by Bérenger and the others of the Templars. It also includes this:


After this, we concluded to extend the mercy of pardons for these acts to Brother Jacques de Molay, the Grandmaster of the said Order, who in the form and manner described above had denounced in our presence the described and any other heresy, and swore in person on the Lord’s Holy Gospel, and humbly asked for the mercy of pardon [from excommunication], restoring him to unity with the Church and reinstating him to communion of the faithful and the sacraments of the Church.

Whatever they heard, they did not consider it damning enough to keep the Templars excommunicated. Examining this document has led some to suggest that the steps of the secret initiation may very well have included what look like desecration, but had a different purpose. The statement of de Gonneville, for instance, suggests that denouncing the Cross was not necessary, and perhaps was a test of faith. It has also been suggested that the initiation was intended to expose them to what they might encounter if they were captured by non-Christians during tours of duty in the Middle East.

So maybe they did do the "terrible" things of which they were accused, but the reality/intent was very different from the appearance.
Posted by Daily Medieval at 7:30 AM