The King and London 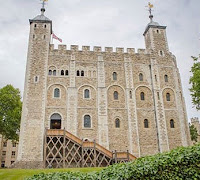 The Tower of London is the most visited tourist site in London. It was built by William the Conqueror to be the king's home when he was in London. It was built not to be just a home, however, but a fortress. London was not necessarily a safe haven for the king. Its citizens enjoyed a level of control over their own fates and weren't about to let the king change that.

William recognized this, and made sure that he had a secure place to stay when he visited London. The White Tower (named because it used to be whitewashed) was designed for this. More than that, he built another fortress at Windsor, where he could station troops that would be a day's march from London if he needed support.

Although he might have felt he would be reasonably safe from an uprising, he took to heart the importance of independence to the citizenry of London, the most important city on the island. There still exists his charter, granting to "all the citizens, French and English" the same "laws and customs as they were in King Edward's time."
Posted by Daily Medieval at 7:30 AM

Email ThisBlogThis!Share to TwitterShare to FacebookShare to Pinterest
Labels: Tower of London, William the Conqueror