Berenger Fredoli and the Rebellious Canons 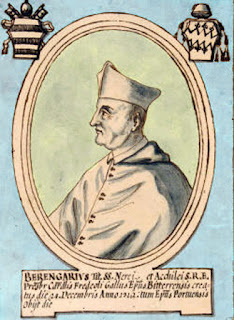 Bérenger Fredoli was a Frenchman with a successful religious career. Little is known about his youth, except that he was born in Vérune about 1250. Some of his career highlights include:

In July 1321, a document with his name on it was sent to Maiden Bradley Priory in Wiltshire, England. Maiden Bradly was founded in 1164 as a leper hospital. A few decades later, it was placed under the authority of Augustinian canons, but it had been not living by the proper Augustinian statutes. For these transgressions they had been excommunicated.

Bérenger's letter was on behalf of Pope John XXII, notions that they had seen the error of their ways, punished the offenders, and were granted absolution, lifting their excommunicated status.

Berenger's name cropped up on another letter just a few years ago, regarding the persecution of the Templars. We will look at that next.
Posted by Daily Medieval at 8:00 AM