I mentioned that Cosimo de' Medici was named for Saint Cosmas, as in Cosmas and Damian. They were two Arabian physicians of the 3rd century CE, possibly twin brothers. 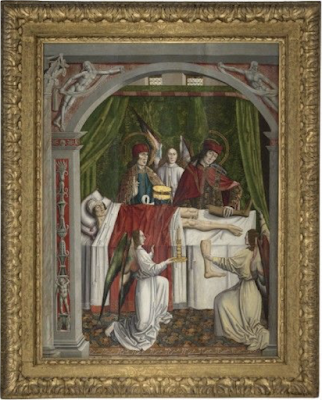 They were known for treating people and not charging for their services—which seems very unlike doctors, but let that go. Because they were Christians, they were martyred in Syria in 287 CE.

...and that's all we have on their lives. Afterward, however, the legends grew. As saint physicians, the healing power of their relics was considered prodigious. Not long after their martyrdom, churches were springing up dedicated to them. Numerous pilgrims came for healing, and through the Middle Ages pilgrims would sleep in their churches, hoping for a healing dream.

Healing dreams were common in classical and medieval times: the belief that a spirit would appear in your dreams and diagnose or cure you. The picture here is a 1495 painting by the Master of Los Balbases. It represents the story of a man with a w withered leg sleeping at a shrine dedicated to the saints. When he woke up the next morning, he had a healthy leg, but it was from a black man. Assuming it had been transplanted from the corpse of a black man recently deceased and buried in the church graveyard, they exhumed the man's body and found that, indeed, his leg was missing.

Their feast day is 27 September.
Posted by Daily Medieval at 7:00 AM