Medieval philosophers categorized several logic puzzles as insolubilia, unsolvable things. Probably the most common of these was (and still is*) the Liar Paradox. 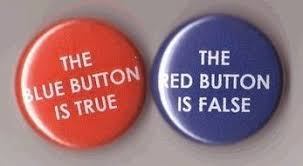 Consider the statement "I am lying." If I am truly lying at that moment, then what I just said was true. If the statement is therefore true, however, then to say "I was lying" would be a lie. So which is it?

One 20th century philosopher used Jean Buridan (c.1300-c.1361, mentioned elsewhere in this blog) to claim that it wasn't really a paradox. Arthur Prior said it wasn't really paradoxical because every statement includes an assertion of its own truth. The statement "I am lying." is therefore taken as true—it carries its own truth independent of other sentences or context— and considering it a paradox is an unnecessary complication.

Buridan actually used the Liar Paradox to prove the existence of God. He put forth two statements:
"God exists."
"None of the sentences in this pair is true."


The only consistent way to assign truth values, that is, to have these two sentences be either true or false, requires making “God exists” be true. In this way, Buridan has “proved” that God does exist. [Internet Encyclopedia of Philosophy]

This particular paradox first appears in the middle of the 4th century BCE. Eubulides of Miletus made a list of seven puzzles, one of which was “A man says that he is lying. Is what he says true or false?” His commentary on whether it is true or false is lost to time.

*Those readers of a certain vintage will remember the Star Trek: The Original Series episode "I, Mudd" in which a controlling super-robot is rendered useless by its inability to process the two statements "Everything Harry Mudd says is a lie." followed by Mudd saying "I am lying."
Posted by Daily Medieval at 7:00 AM