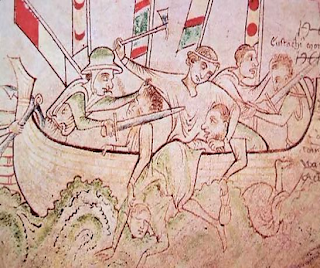 There were many reasons why someone would become a pirate, I suppose. It was probably rare that a monk would do so, however.

Eustace Busket was more than a monk and a pirate. Born about 1170 near Boulogne, he was a younger son of minor nobility who, not being likely to inherit much in the way of lands or titles, went to Toledo in Spain to study, where supposedly he took up "black magic" and produced marvels. For some reason, he gave up that life, returning home to join a Benedictine monastery at St. Samer near Calais.

At some point he left the monastery and became the seneschal and bailiff for Count Renaud de Dammartin. Eustace was accused of mismanaging his duties, and about 1204 he fled his responsibilities and the accusations. He was declared an outlaw, and became a pirate, sailing the English Channel looking for plunder.

He was a well-known figure, and King John paid him occasionally between 1205 and 1212 to harass Philip II of France. He would sometimes raid the English Coast for fun and profit and be declared an outlaw again, but King John always forgave him eventually to continue the harassment of Philip. John also gave him 30 ships to use in his missions.

In 1212, Eustace switched to supporting France, and when English Civil war broke out in 1215 (ultimately leading to Magna Carta), he supported the English barons against King John. Eustace carried Prince Louis of France to England to join the Barons, and on a 1217 mission to bring Louis aid, he got caught up in the Battle of Dover. Eustace managed to escape, but his enemies caught up with him, and on 24 August 2017, at the Battle of Sandwich, he was caught. We do not know exactly how he was executed, but Mathew Paris portrays him as being beheaded (depicted above).
Posted by Daily Medieval at 7:00 AM