The Second Council of Nicaea 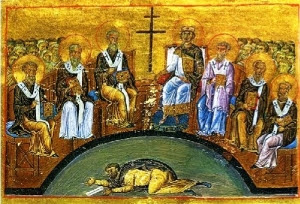 We have talked about the Council of Nicaea before, but always the First Council in 325. There were several ecumenical councils. The seventh was the second to be held in Nicaea, and was called to deal with the subject of iconoclasm.

I addressed iconoclasm before: the idea that images of religious figures should be forbidden came from Moses' third commandment about not making "graven images."  In 787, the Second Council met to deal with the subject (they hoped) once and for all.

Arguments for included invoking various lines from the Old Testament:

Over the course of three weeks (24 September to 13 October), presentations were made followed by debate. At the end, the use of religious images was allowed, reversing the edict against them made by Byzantine Emperor Leo III decades earlier. The official statement made declared that veneration offered to the image was actually passed to the subject of the image, and was therefore a good thing.

This Council also declared that every altar should contain a saint's relic. Roman Catholic and Orthodox churches still adhere to this practice.
Posted by Daily Medieval at 7:00 AM