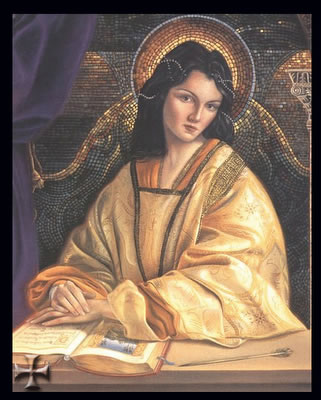 [I am on a brief vacation, so here is a post from the past. This post first appeared 2 December 2012.]

When Anna Comnena was born in 1083, she tells us in her history The Alexiad, she was presented with the trappings of a ruler, a "crown and imperial diadem." This might have been appropriate, since she was the only child of the Emperior Alexios I. Once her brother John was born in 1087, however, Alexios had another option, and John was proclaimed heir in 1092.

Alexios became ill in 1112, turning the administration of the empire over to his wife, who in turn handed it to Anna's husband, Nicephorus Bryennius. The emperor recovered, however, and lived to fight more battles.  In 1118 he had an attack of rheumatism so severe that he was incapacitated and unable easily to draw breath. Anna was there, offering her medical opinion along with multiple physicians. By placing their hands on the emperor, they detected multiple irregularities in his arteries. After several days of growing inflammation and difficulty breathing and swallowing, he died.

At this point, The Alexiad ends; accounts of what followed come from historical accounts later in the century. John was proclaimed Emperor John II Comnenos. An unsuccessful attempt to murder John took place at the funeral; some modern scholars assume that Anna must have been involved. In fact, we are told by people decades after the fact that Anna attempted to usurp the throne from her brother and place her husband on the throne, so she could reign as empress at his side.

There was an interesting precedent that makes this believable. Nicephorus' father (or grandfather; there is some confusion in the records) had, many years earlier, attempted to take the throne from Emperor Michael VII. The attempt failed, largely because of the efforts of the young man who would grow up to be Emperor Alexios I. In the present case, however, we are told that Nicephorus was not interested in the conspiracy to overthrow John. Anna's response (remember: this was said years later by someone who never knew her) was that "nature had mistaken the two sexes and had endowed Bryennius with the soul of a woman.” The Empress Irene, we are told, also had no interest in overthrowing the rightful ruler, for all that we are told she favored her daughter.

Nicephorus and John actually had a decent working relationship, and accompanied him on a Syrian campaign in 1137. Nicephorus fell ill, however, and returned home early; he died shortly after. Anna, after his death, retired to a convent that her mother had founded, where she began her 15-volume history.
Posted by Daily Medieval at 6:50 AM