Regarding the Burning of Heretics 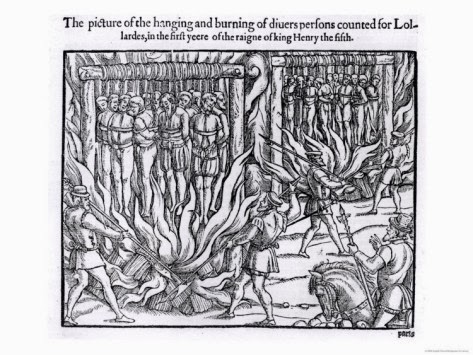 In 1401, during the reign of King Henry IV of England, Parliament passed a law known by the phrase, De heretic comburendo ["Regarding the burning of heretics"]. Heresy was always a concern, going back to Pelagius and Arius, but England had a new threat in the Middle Ages, in the form of John Wycliffe, whose attempts at reforming the church and politics did not sit well with those establishments.

True, by 1401 Wycliffe (c.1324-1384) had been dead for years, but his ideas had inspired a movement called Lollardy, and his plan to bring the word of God into the hands of the masses via his English-language Bible ran the risk (according to Church authorities) of leading the faithful astray by giving them the chance to read Scripture without the proper learning to understand its precise meaning. Something had to be done; something proper and legal—after all, England was a country governed by law, not whim.

Hence the De heretic comburendo, which described the Lollards as:


...divers false and perverse people of a certain new sect...they make and write books, they do wickedly instruct and inform people...and commit subversion of the said catholic faith. [link]


...and they the same persons and every one of them, after such sentence promulgate shall receive, and them before the people in an high place cause to be burnt, that such punishment may strike fear into the minds of others, ...

This statute stayed on the books in England until 1677.
Posted by Daily Medieval at 7:00 AM