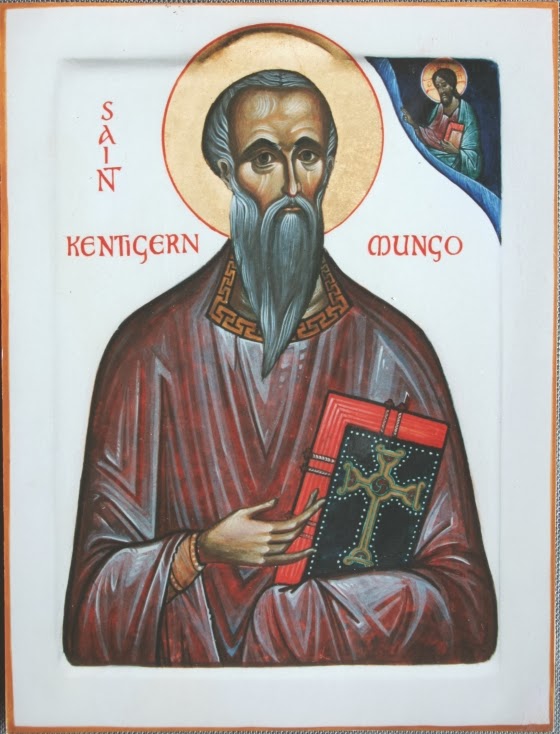 Today presents many opportunities to tie into previous posts. It is the date of the deaths of St. Rémy in 533, of Abbot Suger in 1151. It is the date of riots in Constantinople that destroyed half the city when the Blues and Greens fought, and the elevation of a new King of the Franks named Odo. Instead, however, let us talk about Kentigern, known to the Welsh as Cyndeyrn Garthwys, but whom the world now knows as Mungo.

Although he lived in the late 6th century, no complete biography exists before the 1185 version by the hagiographer Jocelyn of Furness. Jocelyn claims he used an Old Irish document; there is a manuscript  with a partial biography from the Cotton Library that might be what he refers to.

If we turn to Welsh geneaological tables from the Middle Ages, we learn that he was the son of King Owain of Rheged. If we are to believe Jocelyn, Owain raped a saint, Teneu, whose father then had her thrown from a hill in Lothian; she survived, fled to Fife, and there gave birth to Mungo.

In his twenties, Mungo started ministering in Strathclyde to those living in what is now Glasgow. Saint Ninian had already brought Christianity to the area, and he welcomed Mungo. An anti-Christian push by a later king prompted Mungo to travel to Wales where he spent time with Saint David (c.500 - c.589). Eventually, a new king in Strathclyde invited Mungo to return.

Mungo has some miracles to his name, such as reviving a dead pet robin and finding a fish in the River Clyde that had swallowed an important ring needed to prove the queen's fidelity to her husband.