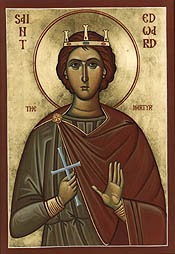 One of the shortest reigns in the history of England was that of Edward the Martyr, from 975 until 978. Edward, who was born c. 962, was not his father's choice of a successor, but succession wasn't automatic. When King Edgar died, a conflict came about between Edward and his younger brother, Æthelred the Unready. Edward was supported by two archbishops, while other ealdormen (nobles) were for Ethelred.

On of the reasons for the dispute over the choice was that, although Edward was a few years older than Æthelred, Edward's legitimacy was questioned. He was certainly a son of Edgar, but his mother's identity is not clearly reorder; one story is that Edgar seduced a nun.

Edward's reign was marred by a comet that appeared shortly after his coronation. The Anglo-Saxon Chronicle claims that the comet presaged famine and many other disturbances. His father's choices also caused trouble. Edgar had reformed the monasteries, giving them more land so that they could support themselves. This meant taking land away from the nobles that possessed them. With Edgar dead, retaliation by the nobles who would like their land back almost led to a civil war. Nobles forced monasteries to relinquish their extra lands.

Edward was barely a teenager when he was crowned, and the running of the country was probably handled by others. There are very few royal records relating to his reign, suggesting either very little being done or a lot of "under the table" decisions by his councilors.

He was killed on 18 March 978, while visiting the half-brother who became his successor. One story is that Æthelred's mother, Ælfthryth, distracted him with a drink while he was visiting them at Corfe Castle, whereupon men attacked him. Other accounts (not written until later) claim simply that he was martyred, or that he was killed by several supporters of Æthelred while he was dismounting from his horse. Most accounts agree that he was buried with no honors. Later, however, his body was removed to Shaftesbury Abbey, where it became the focus of worship by many because, when they dug him up, his body was found to be uncorrupted, a sign of sanctity. A cult grew up that venerated him as a saint, although he was never formally canonized.
Posted by Daily Medieval at 6:30 AM