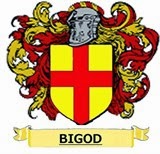 Little is known about Ida de Tosny, but she was likely the daughter of Ralph de Tosny (c.1130 - 1162) and Margaret Beaumont. Orphaned at a young age, she was lucky enough to be given to the protection of the King, Henry II.

She first enters the public record in Christmas 1181, when she is married (quite advantageously for her) to Robert Bigod, the 2nd Earl of Norfolk. Robert's father had joined Henry's sons when they rebelled against their father inn 1173-74, so the family lands had been confiscated. The estates—Acle, Halvergate, and South Walsham, all in Norfolk—were returned to Robert (who had remained loyal to Henry) upon his marriage. He did not, however, get his father's earldom until 1189.

Robert and Ida were loyal to the royal family, and provided several (four boys and two girls) loyal children. Their eldest, Hugh, became the third Earl of Norfolk and married a daughter of the powerful William Marshall.

Ida doesn't really become more interesting until long after her death, when a charter is discovered connected to William Longespée, 3rd Earl of Salisbury; it refers to Comitissa Ida, mater mea ["Countess Ida, my mother"]. William was known to be an illegitimate child of Henry II, but his maternity was not known prior to this stray comment. It had been assumed (but the rumors came long after his lifetime) that his mother was Rosamund Clifford, Henry's best-known mistress. Clearly, Henry treated Ida as something more than a ward.

And that's all the historical significance we can find for Ida de Tosny, except that she does become, with her husband, a character in the historical novels of Elizabeth Chadwick, most notably The Time of Singing. Immortality can come from very small occurrences, sometimes.
Posted by Daily Medieval at 7:00 AM