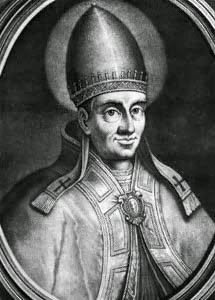 Pope Innocent I was an early-5th century Italian pope. The Liber Pontificalis ["Book of Popes"] says he was the son of a man who was also named Innocent. It is believed, however, that the Liber was composed over a hundred years after Innocent's death—and its purpose seems to be one of papal propaganda—and so its accuracy is often questioned. Jerome, who was a contemporary of Innocent and wrote about the popes, claims Innocent was the son of Pope Anastasius I (died 19 December 401), who was Innocent's immediate predecessor as pope—a unique occurrence.

He was mentioned in Daily Medieval previously, when John Cassian appealed to him on behalf of the exiled (St.) John Chrysostom. This opportunity to weigh in would have pleased Innocent: he seemed to be concerned with formalizing and centralizing the authority of the Catholic Church in the person of the pope. He also wrote to various bishops, "confirming" authority they had been granted by previous popes, and thereby establishing the papacy itself as the authority. Through various letters (that still exist), we see Innocent using Roman Catholic practices to settle disputes and establish discipline and policy in far-flung dioceses.

Innocent did everything he could to quell heresies among the faithful, such as Montanism, which seemed to differ from mainstream Christianity in that inspiration received directly from the Holy Spirit superseded any words of Jesus or the popes; and Pelagianism, which taught that Original Sin did not stain each human, that Adam died through natural causes (and not because Sin had flawed him), that good works were possible without God's grace, and other beliefs.

So what's this rumor about allowing pagan practices (reported by the historian Zosimus)?

Well, Innocent was in Rome when Alaric I and the Goths arrived, bringing Arianism. Although the Goths respected Roman culture and wanted to rule it rather than destroy it, they so thoroughly overwhelmed the Roman forces and civil structure that perhaps there was pressure to accommodate their Arianism, and this is what Zosimus refers to. As it happens, Catholic Christianity was so ingrained in Roman society by that time that apparently there was no noteworthy rise in pagan ceremonies.

Innocent died on 12 March, 417. He was succeeded by Pope Zosimus (no relation to the historian), who also struggled with Pelagianism.
Posted by Daily Medieval at 7:00 AM