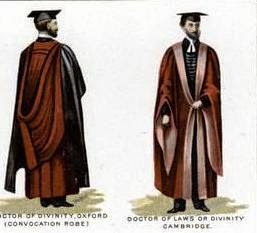 Because medieval universities were often designed as breeding grounds for educated clerics, clerical robes were a standard form of dress. As time went on, however, simple black robes were not sufficient to distinguish the various levels of student, and an elaborate system of colors and styles developed to account for various levels of achievement, various schools of study, and even for different universities. Much of what we consider proper academic style now is derived from the traditions of Oxford and Cambridge Universities.

There are three major parts of the regalia: gowns, hoods, and caps. Basic features are described below, but understand that each institution can modify the styles for its own use.*

Gowns come primarily in three varieties. The baccalaureate (bachelor's degree) gown is plain, with open sleeves. The master's degree gown has a long sleeve with a slit at the elbow for the arm to extend through; the rest of the sleeve hangs down and is enclosed (for storing handkerchiefs?). The doctoral gown has long voluminous sleeves with three velvet chevrons or bars encircling them.

Hoods are likewise a distinguishing feature for the three levels of academic achievement, with bachelors wearing the plainest hoods, about three feet long, with the narrowest velvet band (of about 3") that goes around the throat. Masters have a 3.5" band with a 3-4 foot hood whose inside lining is of the university's colors. Doctors have a longer and wider hood with a 4" band around the throat.

The hood is also where color can distinguish the school of study. Time has provided color schemes for everything from Accounting (Drab) to Nursing (Apricot) to Veterinary Science (Gray). See an extensive list of subjects and colors here.

The mortarboard is carried when indoors and worn outdoors. Women used to be required/allowed to wear them indoors. The tassel is worn over the left quarter; some graduation ceremonies make a point of starting with the tassel over the right, and switching it after the conferring of degrees. Tassels are black, but doctoral tassels can be gold.

*This is a very basic description of the differences in academic regalia, inspired by the 150th Commencement at Bard College this past weekend.
Posted by Daily Medieval at 7:00 AM