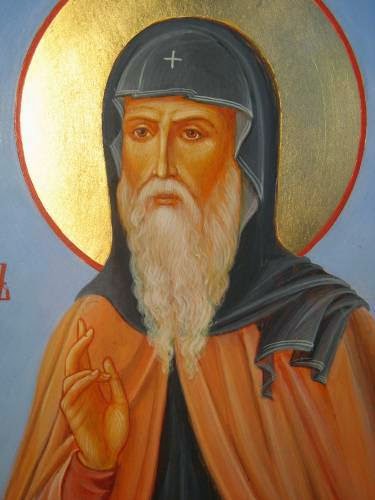 In the 5th century, a very short man was born in Egypt to a poor Christian family; he became known as John Kolobos, from the Greek Ιωάννης Κολοβός [Ioannes Kolobos, "John the Dwarf"]. Early in life he decided he wanted to join the monastery in the Nitrian Desert run by St. Pimen the Great (also called Saint Pambo) with John's brother, Daniel.

Life at the monastery inspired him to greater sacrifice—or made him unhappy with the demands of the lifestyle—and he thought of a plan to live even more simply:


...St John told his elder brother that he did not want to be concerned about clothing and food, and that he wished to live like the angels in Paradise. Daniel allowed him to go to a deserted place, so that he would be afflicted. He removed his clothing, John went out from the cell. It was very cold at night, and after a week John became hungry.
One night John went back to the monastery and began to knock on the door of the cell. “Who is it?” Daniel asked.
“It is I, your brother John.”
Daniel replied, “John has become an angel, and is no longer among men.”
John continued to knock, but Daniel would not let him in until morning. Then he said, “You are a man and must work again if you want to eat.” St John wept bitterly, asking for forgiveness. [link]

Having realized that he needed to think more rationally about his expectations of the monastic life, he was given an assignment by St. Pimen. St. Pimen understood that John needed to learn obedience—and perhaps some humility—and gave him an assignment: John was to water a dry stick every day until it bloomed. The process took three years, after which the stick bore leaves and fruit. There is a tree in the Nitrian Desert called the Tree of Obedience that purports to be from the stick watered by John the Dwarf.

John became a guide to many others, such as St. Arsenius the Great, and authored the "Life of Saint Paisius." His feast day is celebrated on 17 October.
Posted by Daily Medieval at 7:00 AM