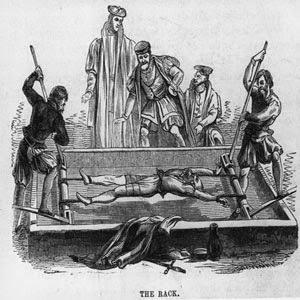 We've talked about torture before, regarding the Templars, and the "ultimate" torture of being hanged, drawn and quartered; and, of course, when HD&Q was first applied to a rebellious Welshman.

Torture in the Classical Era had limits: at first it would only be applied to slaves. In fact, evidence given by a slave was required to be given under torture, because slaves could not be trusted to be truthful on their own!

In the Middle Ages, torture was admissible for getting evidence, but it was not to be used randomly; there had to be some proof that the person was guilty before it was appropriate to use torture to get a full confession.

Although torturous methods of execution were a chance for public exhibitions (so that they could be a deterrent to crime), torture used for extraction of information was private. The methods were numerous: the Rack (seen above), thumbscrews, hot irons applied to the body, hot pincers pulling the body apart, etc.

Torture took a significant turn on 15 May 1252 with the papal bull ad extirpanda, by Pope Innocent IV. It is called ad extirpanda from the opening words in Latin, which translate as "To root up from the midst of Christian people the weed of heretical wickedness...". The point of it was to authorize torture for use against heretics. Even so, it had limits:
Actual execution of a convicted heretic was to be carried out within five days by the secular authority, which was also allowed a share of the property of the convicted.

Torture of heretics was rescinded by another papal bull in 1816.
Posted by Daily Medieval at 7:00 AM