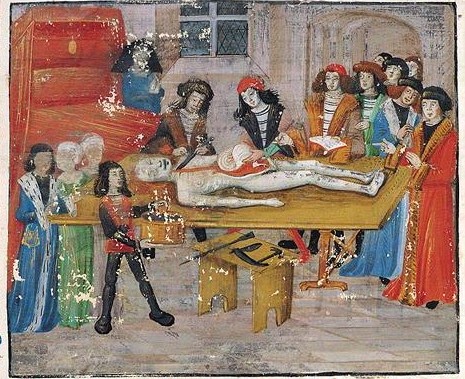 When learning about people in the Middle Ages, you can only go so far with records and archaeology. Sometimes you have to go to the people themselves—and not be dissuaded by the fact that they are dead.

It is said that "dead mean tell no tales"—a phrase nowadays associated irrevocably with Disney's "Pirates of the Caribbean" ride, but probably originated by John Dryden in The Spanish Friar (1681), act IV, sc. i—but in fact we can learn a lot about dead men by examining their bones.

Someone who is learning a lot about the Middle Ages from bones is anthropologist Sharon DeWitte.* She spends her summers traveling from the University of South Carolina to London where she is able to analyze the bones from medieval English skeletons.

What can she tell from skeletons?


DeWitte says where the two halves of the pelvis meet in the front and join in the rear provide consistent signs of adult aging. For children, teeth and the fusing of certain bones are among the best indicators of age. To determine sex, she looks for a wider pelvis in women and a squared jaw and skull made rugged along the forehead and back by testosterone in men.
...
She also examines for linear enamel hypoplasia, or little horizontal grooves that form on the teeth of children whose enamel formation was interrupted by malnutrition or infectious disease. Visible to the naked eye, these defects remain through adulthood and tell DeWitte the ages of when the health disturbances would have occurred.

Tomorrow, we will look at some of the other things she can discern about medieval disease and life-spans, and the surprising conclusions she has come to about the aftermath of the Black Death.

*This post inspired by and drawn from here.
Posted by Daily Medieval at 7:00 AM

Email ThisBlogThis!Share to TwitterShare to FacebookShare to Pinterest
Labels: medicine